The Enterprise Band are playing at the Annual ‘Musik Fest’ on Friday 31st March at 8.30.  The event starts at 7.30.  See poster for details. 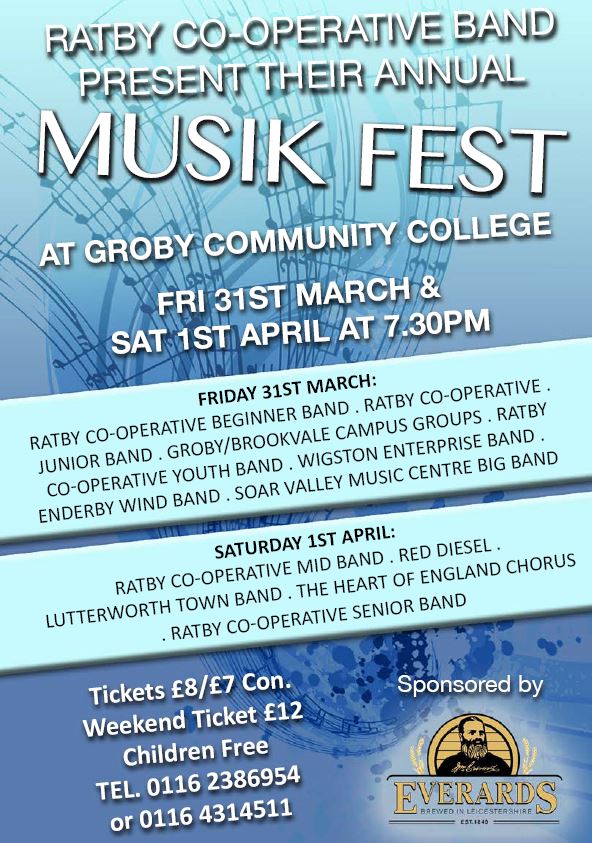 Chris has been a friend of The Wigston Band for many years, often being persuaded to fill in on euphonium by previous MD, Garry Sleath. As soon as the opportunity came up to join such a friendly and enthusiastic band, Chris certainly jumped at the chance!

He has lots of playing experience with lots of Enderby Band, working his way up from Enderby Youth Band through to Enderby Seniors where he took up positions as principal euphonium and assistant MD. As well as this Chris has enjoyed playing successes with Carlton Main Frickley Band when they won the Grand Shield earlier on this year. Let’s hope he can bring some of this winning style to Wigston!

Excitingly, Chris’s debut Wigston Band concert is this December! We are holding a free concert on Thursday 15th December, 7:45pm at St Thomas Church, South Wigston. As a registered charity The Wigston Band relies very much on events such as these to allow them to continue their good work within the community such as teaching youngsters in the community how to play music and giving experiences to those who wouldn’t normally have the opportunity. This concert always proves to get people into the festive mood, with a range of music to suite every taste and a raffle too! Plus, there will be lots of mince pies to enjoy.

The Wigston Band would like to warmly welcome and introduce our new Musical Director, Mr Christopher Small.

Chris has been a friend of The Wigston Band for many years, often being persuaded to fill in on euphonium by pervious MD, Garry Sleath. As soon as the opportunity came up to join such a friendly and enthusiastic band, Chris certainly jumped at the chance!

He has lots of playing experience with lots of Enderby Band, working his way up from Enderby Youth Band through to Enderby Seniors where he took up positions as principal euphonium and assistant MD. As well as this Chris has enjoyed playing successes with Carlton Main Frickley Band when they won the Grandshield earlier on this year. Lets hope he can bring some of this winning style to Wigston!

His next big challenge for The Wigston Band is to recruit some extra players in order to fill the few remaining seats we have. If you or someone you know would like to join us on our new and exciting adventure with MD Chris Small, then please contact us:

It should be a very exciting few months and years to come, with new members, concerts, contest experiences and obviously our young and enthusiastic MD!

Enterprise Band to Play at Leicester Light Switch On!

Enterprise Band have been asked to play carols in Town Hall Square 17 November between 6.30 and 7.30 for people to listen to while they turn on the lights.

The Wigston Enterprise & Horizon bands will be playing at Wigston Christmas Capers from 3.30pm on 3rd December. 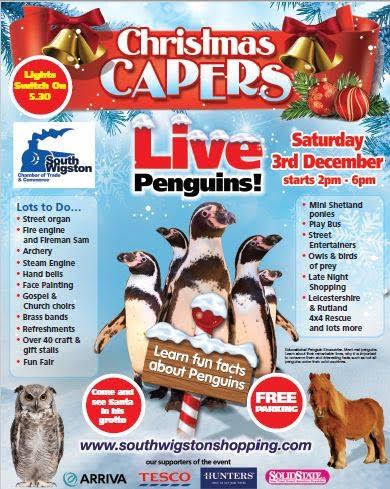 Our latest Band Newsletter, Bum Notes is out!
Click here for the latest edition full of band news. 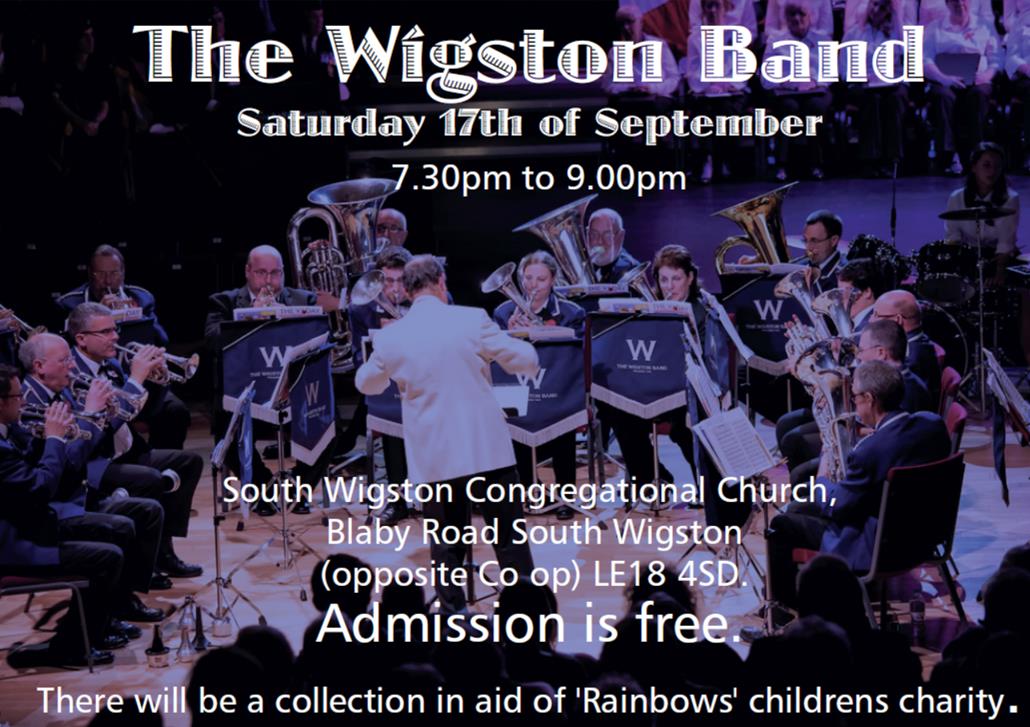 The Wigston Band are now recruiting for a Musical Director due to the retirement of our current MD. We are a family friendly, sociable and ambitious organisation looking to build on our success at the 2016 First Section Midlands Area contest. Rehearsals are Tuesday and Thursday in South Wigston, Leicester – just 10 minutes from Junction 21 of the M1.

You would normally imagine that a brass band would only really celebrate when they get prizes in a contest! But this was not the case for The Wigston Band this March when they took part in the Area contest in Bedworth. Here is why we were so excited!

Way back in September we learned that this year’s test piece was Essay by Edward Gregson. Although it didn’t seen like much of a test to begin with, having not a great deal to do in some of the parts, the test piece very early on began to teach us not to judge a piece by the number of semiquavers within it! Essay is a test piece consisting of three varied movements, each with literary ideas within them. For instance movement one is entitled ‘Dialogue’ and features a conversation between all of the instruments, moving the them back and forth around the band. The second movement, ’Soliloquy’ has a more poignant and tranquil mood dedicated to the memory of Gilbert Vinter and featuring all of the main soloists with the sombre theme. Finally, the third movement, ‘Epigram’, provides much rhythmic contrasts and aims to provide an exciting conclusion to the piece.

So, following the Christmas excitement, we settled into a schedule of rehearsals on Essay, with the hope of putting in a good performance in March. As always, banding is never always straightforward with people leaving or being busy and having to find replacements. We were lucky to warmly welcome back Matt on soprano, Jenny on 2nd cornet, Mandy on 3rd cornet and Lee on Bb bass. As well as this we said hello to Will and Lauren on the back row and Chris on trombone. These players certainly helped to strengthen our line up and we hope they will continue following our Area success!

In the run up to the contest, the rehearsals went well and the band soon settled in to the demands of the piece before the big day finally arrived on the 12th March. Banding website 4barsrest.com had initially filled us with a sense of dread by placing us within the second section during their Area preview, making us believe that we had been learning the wrong piece for the previous few months. In addition to that, 4barsrest.com hadn’t even predicted that we would get a good placing in this lower section! But we decided to go and prove them wrong and show them that we are more than capable to be in the first section!

And that is exactly what we did! On stage the band put in a solid performance with very few errors to detract from all of the hard work we had put in. All members played well, with special mention being given to Alison Harding who did a super job on principal cornet and nailed her top C!

During the adjudicators speech prior to the results, all bands were told that they had found it really easy to order the bands, with the top 6 bands clearly standing out from all of the rest. The Wigston Band were hopeful but didn’t expect to come anywhere, so when we found that the adjudicators had in fact placed us as 6th we were overjoyed! This was especially enhanced when we realised that we were one of the top placed bands from Leicestershire! As well as this, we had also beaten bands who had just been relegated from the Championship section and who had hoped to win in the First Section.

So, on the 12th of March, The Wigston Band proved that not only are they are a worthy First Section band, we can produce performances that will contradict any previews and predictions of others! Even though we hadn’t won, nothing would stop us from celebrating our banding achievement and the great team work we displayed.

Read current and past Newsletters